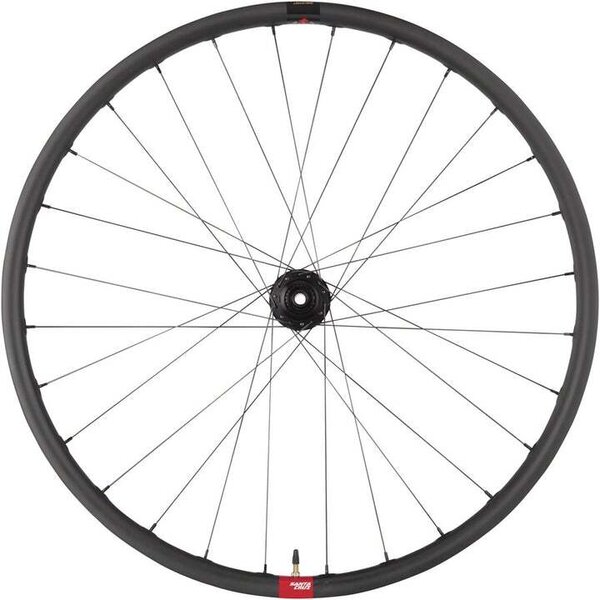 Begging you to drop into chunky, rock-strewn sections and launch off everything in sight, the Santa Cruz Reserve 27 27.5in DT 350 Boost Wheelset is designed to take a serious beating out on the trail with its reinforced bead and spoke nipple interface. In fact, Santa Cruz designed their Reserve Wheels to be the strongest carbon hoops on the market through extensive research of critical failure points, going so far as to redesign the impact testing protocol used on traditional carbon rims.

Instead of replicating the pothole-like impact test used on traditional carbon rims, Santa Cruz developed their very own testing procedure that simulates one-sided impacts that normally occur when a rider lands on a square, protruding rock after getting airborne. As they began testing leading manufacturer's carbon wheels, it became readily apparent that most carbon wheels not only broke along the expected bead, but they also failed along the spoke nipple interface, due to the drastic increase in spoke tension as the wheel flexed upon impact.

To mitigate these breakage issues, Santa Cruz beefed up the rim bead, increasing its thickness by one millimeter along each side for improved resiliency when you're thrashing the living hell out of these wheels. The design engineers at Santa Cruz then fortified the spoke holes with square-shaped reinforcements you can visibly see, which protect the spoke nipples from suddenly pulling through due to harsh impact. Although Santa Cruz isn't the first company to reinforce a carbon rim's high-stress areas, they're one of the first to offer a lifetime warranty, so long as you actually break them out on the trail.

It's worth noting this particular Reserve 27 Wheelset is laced to DT Swiss 350 Hubs for outstanding reliability and relatively quick engagement with its 36-star ratchet system. The rim's 27-millimeter internal width provides optimal support for your average trail tires, ranging from 2 to 2.5 inches. J-bend spokes and mechanical lock nipples make for easier replacement, should you break a spoke or nipple when you're away from home. Please note, they're available in Boost spacing only.

* Subject to change without notice.